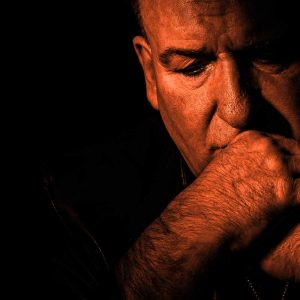 Elias.T.Hoth is essentially a no nonsense, no messin’, no mercy, hard ass, mean kickin’, hell, fire and brimstone, blood spittin’, British rock ‘n’ roller. He has played a great part in keeping rock alive for the last 15 years as those of you that have grown along with him will know. More recently however, Elias has been reworking and penning new and more reflective and sensitive acoustic ballads songs for his up and coming new album. Be sure though that this has taken nothing away from his brilliance as someone who not only writes but also promotes and plays all his own original rock, blues, and acoustic material.

Elias.T.Hoth was born in Leigh, near Manchester, England in the 1960’s leaving us in no doubt that he is a battled hardened war horse and a thoroughbred British rocker, being influenced by such iconic bands as AC/DC, Deep Purple, Bad Company, Queen and Status Quo. Studio Albums He has written well over a 100 songs to date such is the measure of his portfolio.. This has generated the release of 11 incredible, creative works, including 5 original studio albums ‘Let Sleepin’ Demons Lie’ 2007, ‘Wrath Widower’ 2013, ‘Confession with the Devil’ 2015, the acoustic album ‘Sickle & Scythe” 2017 and ‘O Rhesus Negative’ his new album, which is currently in the final stages of production, and will be available for worldwide sales in April 2018.

In addition to the above, his talents have also brought us 4 live albums, plus 2 live DVD’s with ‘Let Sleepin ‘ Demons LIVE’ (also a DVD) 2009, ‘Wrath Widower Live’ 2013 (also a DVD), ‘Live at The UK’s 2013 Colne International Blues Festival’ 2013 and his latest live recorded album ‘Live ‘n’ Lethal’ 2017. All his material is distributed and sold worldwide and continues to contribute to his ever-growing global fan base.

Elias was presented with a gold disc award by the internet music company cdbaby.com for the fastest selling worldwide sales of his 2013 ‘Wrath Widower’ studio album. His ‘Confession with the Devil’ album released in February 2015 went straight in to the cdbaby.com charts at no. 19. In fact, his ‘Confession with the Devil’, ‘Sickle and Scythe’, and ‘Live and Lethal’ albums all immediately made the top 20 billing in the cdbaby.com global music charts. In 2015 his dark, blues song ‘Sleazy Hussy Fever’ appeared in the top 20 of the great USA song competition with more than 250,000 original songs entered. He was also highly honoured to be asked to open the Lancashire Haigh Hall Music Festival 2009, an event that was attended by more than 11,000 people. In 2010 Elias.T. Hoth won the Manchester Radio stations 106.1 (now INXS Radio) Monsters of Rock Original Band Competition with his ‘Let Sleepin’ Demons Lie’ album single ‘Hex on You’.

His songs have and indeed still are, actively played in the USA top 10 ten A list tracks on such radio stations as ‘All Dixie Rock’ and ‘Southern Rock’ as well as many English, Scottish and even French, German, Scandinavian and other European radio stations! You can bet at any given time, one of his songs is being played somewhere in the world. The music of Elias.T.Hoth, like all good artists, has evolved over the years and continues to do so. He has played at major UK Blues and Rock Festivals, including the Colne International Blues Festival 2013 to name but one where he headlined on the British Bulmer’s stage and from whence a full live album was also born, as well as many others. His venues include throughout the UK from Bonny Scotland, to Barrow in Furness to London’s famous Oxford Road, 100 Club. The 100 Club event was highly acclaimed and reviewed by the UK Classic Rock Magazine under the headline ‘The South Rises Again’. More recently in 2017 he was fortunate to play at a number of venues in Calabria, southern Italy. And the Italians loved him!!

June 2017 saw Elias change direction by revisiting some of his old material. His album ‘Sickle & Scythe’ is an example of what you can do with a rock number by stripping it right back to it’s bare bones and then covering it up again with simply an acoustic coating. This is what Elias has done here. He has taken some of his rock classics and taken them right back to their simplicity. The track ‘Rollin Thunda’ immediately springs to mind as an example. What a transformed song that has become on this album! This illustrates not only the talent of the man but provides us also with an insight into the way he works and how he craft his songs. This album puts much of his older material into a brand new context and perspective, and so worth a listen.

The next new album to be released is entitled ‘O Rhesus Negative’. Why such a title you may ask? Well the answer I am told is that it is named after his own blood group. Aptly named don’t you think! The album will be released and on sale by 30th April 2018. This can be purchased and downloaded directly on line from www.cdbaby.com and www.eliasthoth.com. For those who prefer to purchase a hard copy CD these will also be available from the Elias.T.Hoth website.

For more information, please do check out his website www.eliasthoth.com which will bring you news, views, profiles, gigs, events, album, songs and sample tracks . He can also be found on Facebook under ‘Elias Titus Hoth’ and again, on www.cdbaby.com. If you have any questions or want to leave a message then do so by contacting him via his website. And finally there is also YouTube where you can see him both live and in the studio. Welcome to the world of Elias.T.Hoth.